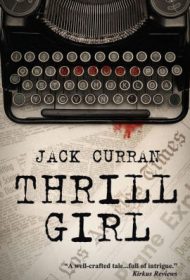 Thrill Girl is a noir mystery set in Los Angeles in 1951, in which newspaperman Jack Curran chases a beautiful but anonymous blonde vigilante he has nicknamed Thrill Girl.

Four different times, Thrill Girl has saved citizens attacked by muggers and left the muggers dead on the street, vanishing before police arrive. Is she a devil or an angel? Curran wants to find out who she is and nail down the exclusive.

Investigating who sent flowers to the almost-victims, the reporter uncovers a clue that leads to blonde, beautiful, and wealthy heiress, Alana Maxwell. As Curran begins to fall for her, he doesn’t want to believe the evidence that points to her being Thrill Girl. Maxwell herself doesn’t know if that’s her identity: Acting as a guinea pig for drugs she hopes will help cure her brother, Tomas, of paralysis, she has lost chunks of her memory.

Thrill Girl starts out a page-turner. The author perfectly sets the noir tone, with his depiction of the gritty streets of LA, the beautiful “dame,” the hard-drinking, cynical journalist doggedly following the story, and the tough cops that resent him poking his nose into the case. What’s driving Thrill Girl? Is her killing spree related to the gruesome slaughter of a man in Griffith Park? Is Curran next?

Then, almost exactly midway, the story splinters and twists into poorly set-up threads about Nazi war criminals, genetic experiments, intelligence conspiracies, and Maxwell’s relationship with her brothers. In the race to tie up these subplots, the author gives them all short shrift. Pacing and suspense falter, and Thrill Girl’s demise comes almost as an afterthought.

Given the author’s impressive achievement in the book’s first half, the last half comes as a major disappointment. One hopes the author will consider revisions to allow the story to live up to its considerable potential.