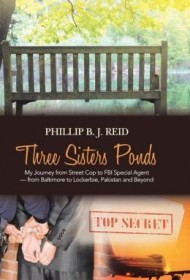 Three Sisters Ponds shares the remarkable life story of Phillip B.J. Reid, from his challenging childhood in an impoverished black neighborhood in Baltimore to his struggles with dyslexia and his determination to live the American Dream.

Through dogged persistence, Reid becomes a Baltimore police officer and then successfully pursues an opportunity to join the FBI. The pinnacle of his career was serving as a key agent in the multinational investigation into the bombing of Pan Am Flight 103 over Lockerbie, Scotland on December 21, 1988. The tragedy cost 259 passengers and crew members their lives.

Reid travels the world for his career, including Malta, England, Rome, Ireland, Japan, India, Pakistan, Guam. This book therefore lets readers glimpse the challenges faced by those involved in international law enforcement as they juggle their jobs with their family lives.

The author tells his story in a straightforward, articulate, chronological manner, with moments of humor interspersed throughout. When recalling the tough-as-nails nuns who taught him in his youth, he refers to them as the “Sisters of (No) Mercy,” while also admitting that his sometimes out-of-control behavior may have needed more than an “intervention (possibly an exorcism).”

Besides sharing his role in the Lockerbie investigation and trial, Reid tells of investigations of the Black Liberation Army, Weather Underground and organized crime groups; participation in FBI SWAT teams; protecting then-President Ronald Reagan after an assassination threat; and much more. In one telling scene, Reid wakes up in mid-airplane flight, perceiving significant turbulence; because of the dangerous characters he was pursuing, he initially thought they had targeted his flight for destruction.

The title refers to a place where, as a young man, Reid contemplates his life goals, and Reid hopes that his book will serve as an inspiration for other youth. The title’s theme is carried out throughout the book, a bit thinly at times, but that’s a minor quibble in an otherwise compelling and absorbing book.