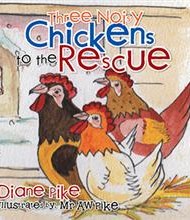 Pike’s new story begins with chickens Heidi, Hetty, and Hilda eager to go outside and experience the falling snow, which they charmingly call “white feathers.” As the snow continues, Grandma, their owner, begins worrying about Max, the dog they share a home with: “He went into the garden with the chickens, but I can’t see him anywhere,” she says. Soon enough, the chickens find Max stuck in deep snow and alert the humans. On the final pages, Grandma gives the chickens a reward for their help.

Pike’s story is straightforward and its characters likeable, and despite Max’s predicament, it is gentle and calming. The text is simple, perfect for children (although marred by occasional forgotten quotation marks and inconsistent punctuation).

The hand-drawn illustrations are beautifully colored and eye-catching, but they suffer some flaws as well. The cover illustration is blurry, and one picture is repeated on facing pages. There’s also inconsistency regarding Max’s size: When shown with the chickens, he first appears their size or smaller, while at the end, he appears to be twice as big. Additionally, the pictures can feel static and, in a few cases, don’t depict the main action that’s occurring in the text. For example, when Grandma tells the chickens, “[..] it’s no good you trying to scratch around for worms. The snow is far too deep for that,” we don’t see Grandma and the chickens, but rather a close up of a worm wearing a winter hat and scarf.

Despite such issues, Three Noisy Chickens is a very readable children’s book, and its young audience will relate to the wonder the chickens experience at the falling of the snow and the way it blankets the world around them. The talent demonstrated by both Pike the author and Pike the artist indicate potential for the series, should future sequels emerge.