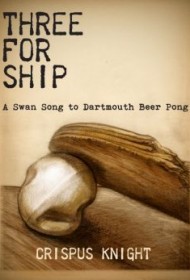 Every few years, Dartmouth College administrators recognize the school has a problem with student alcohol consumption. They routinely investigate (the school’s trustees demanded reforms in 1979, 1983, 1989, 1999 and 2010), release a report, and the issue goes dormant again until another student dies of alcohol poisoning or talks to a reporter.

Crispus Knight slyly begins each chapter of this honest, riotous confessional of his alcohol-drenched days at Dartmouth with quotations from just such a report written in 1999. During Knight’s tenure in the early 2000s, the contrast between these bland, measured words and the wild reality in the basements of Dartmouth fraternities could not have been more jarring.

The “Ship” of the title is a team binge-drinking game – an elitist variation of Beer Pong, which generally uses the same table, balls, and paddles (with the handles cut off) as Ping Pong. “Three for Ship!” is a player’s call for others to join him. A socially awkward and mixed-race “pretender,” Knight knew he was no frat boy. Still, he put on a calculated face and hid behind Ship. He learned the rules, how to arc the ball into cups of beer on his opponents’ side (requiring the losers to drink), and how to vomit: How else to make room for more beer and keep playing? The formerly studious Knight estimates he drank 7,875 cups of beer during Pong alone. As a result, he was kicked out of school twice (though he ultimately graduated).

This is no sad memoir of alcoholism or simple celebration of frat-boy hijinks. It’s an entertaining, analytical tale of how groups brainwash new members. Nicknamed “Balls,” Knight’s perpetually drunk alter ego sometimes narrates the story, and we are there in that smelly, loud frat basement. Other times, the narrator is the well-educated writer, reflecting 10 years after events. Both personas are fun to be around, and Knight takes full responsibility for his own behavior even as he’s describing it.

Knight’s tale is Ping-Pong-meets-sado-masochism. It’s revolting – and fascinating, a book for college students and their parents, readers interested in those with addictions, and, of course, Dartmouth administrators. For their next report.