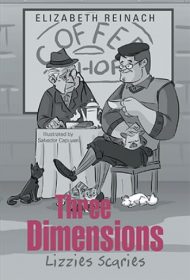 In the opening story, “Aladdin’s Cave,” a young woman turns 18 and can now trade her “dreary” school uniform for the colorful, fine clothing of an adult. She dreams often of clothing, and when the magazine astrologer, Gypsy Meg, promises a week when all her dreams will come true, she heads for some new novelty shops. In the store named Aladdin’s Cave, she’s enticed to conjure Aladdin, who leads her to the “gorgeous” clothes she’s longed for. But reality soon lands her in trouble, and Gypsy Meg’s next message suggests the lesson to be learned.

In the linked stories “Grandma” and “Nice,” the heir of a wealthy family is summoned along with other family members to his grandmother’s 80th birthday. At the gathering, the “evil old woman” reveals the truth of the circumstances that labeled her as an embezzler who ruined lives.

“The Tennis Party 1885 By Sir John Lavery” involves a young woman observing an incestuous relationship with worrisome implications, while “White Witness” features a snowman watching over the arrival of a “Primark Santa,” and “Margaret Donald Is Only A Typist,” presents the mystery of the title character and the catchphrase that goes with her name.

Many of these stories require suspension of disbelief as they rely on imaginative and supernatural events. Most are more slices of life than actual plot-driven tales, and the writing, which has a British flavor (“Should we go to a vicar or lawyer?”), includes some errors, such as missing commas.

Still, the stories are often entertaining, humorous and occasionally may pique readers’ curiosity at life’s inexplicable events. Some are the types of tales traditionally told around campfires or other moments calling for scary or unusual tales, and as, such the author achieves her purpose.

While they won’t appeal to serious literary readers, these stories will be enjoyed by those looking for light entertainment.