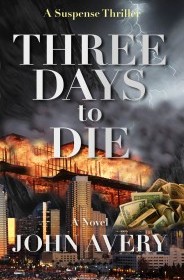 Three Days to Die is a relentlessly paced page turner with a screenwriter’s visual sense and shoot-’em-up gore more typical of a videogame aesthetic than YA fiction. With taut, action-packed chapters and crisp dialogue, John Avery’s thriller keeps things moving at breath-taking speed. He has created a sort of “boy fantasyland” where nasty stepfathers are killed in a tornado of bullets, beautiful mothers need protection and soft-hearted bank robbers teach young heroes how to handle a gun. Reluctant readers may well find this unputdownable. Violence-shy grown-ups, however, may have second thoughts.

Three Days to Die is the story of Aaron Quinn, a smart 13 year old whose father has died. His mother has remarried a nasty fellow with a drinking problem and hair-trigger temper. The novel opens with Aaron in a funk. After suffering through a detention and fighting with his best friend and his stepfather, he escapes to the boys’ secret hide-out on the edge of town and soon learns that it has been discovered by criminals. They quickly sniff Aaron out and set the action in motion. Over the next three days, Aaron’s stepfather is killed and Aaron is kidnapped and forced to take part in brutal robberies. His sexy mother is tossed into danger, and he meets a novelist who may well be everyone’s savior.

While the story is gripping, there are occasional lapses of logic and some pacing issues. For example, as the violence mounts and bodies pile up all over town, it makes less and less sense that none of the grown-ups call the police. Aaron is attacked by a dog in an unnecessary scene in the beginning that slows the story at a critical juncture. The descriptions of Aaron’s mother tilt towards the graphic. (One wonders how teen readers will respond to the concept of a super-hot mother). And the violence is extreme for a novel with a 13-year-old hero.

Nonetheless, young fans may be looking for the second Aaron Quinn adventure after they race through this one.