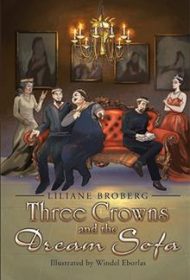 Three Crowns and the Dream Sofa, the first of a planned series, is the fantasy story of a kingdom ruled by a family in crisis.

The kingdom of Viz is a generally happy place, but its ruling family is anything but. Triplet kings Benjamin, Bernard, and Bruno can throw a great party, but their internal squabbles grind governance to a halt far too often. Their younger sister, Princess Experalda, wants to rule, but her foul temper thwarts her ambitions.

Rather than a single plot, the story is episodic: A party is almost cancelled but then saved; a village idiot-type character leads the ruling family to find someone they seek by completing a series of difficult tests, etc. The titular sofa is mentioned briefly as having gone missing—it was the cradle the triplets slept in—but this is never explained or resolved.

At times, particularly when characters discuss family and government, the story becomes highly engaging. But the novel has several problems. Characters devolve into contemporary slang that rings false in this formal royal setting (a king plans to “just chill”), and they often issue staccato bursts of laughter—”Hahahaha hahahaha hahahaha!”—that are hard to imagine.

Meanwhile, Experalda’s character is puzzling. While she’s sometimes depicted as evil in a cartoonish way—kicking a cat and placing unreasonable demands on her young daughter—she’s also portrayed as having a better grasp of government and ruling than her brothers; there’s a nice scene where she resolves a dispute using the wisdom of Solomon, for example. The two elements never mesh tone-wise.

Finally, the lack of information about the couch leaves readers unsatisfied and feeling as if the author is saving material for future books.

Three Crowns and the Dream Sofa has much potential. Some revision of this narrative, however, would make it easier to motivate readers to continue the series.