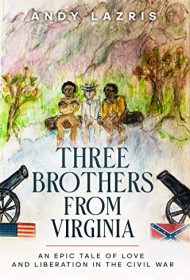 Andy Lazris’s historical novel is set during the Civil War era, focusing on the love between three brothers and those close to them.

Some years before the Civil War, a Northerner whose wife died shortly after giving birth to son Matthew, is encouraged by a friend to purchase a farm in Virginia’s Shenandoah Valley. Eventually, the widower takes up with one of his slaves (“the love of my life”) and with her has two more sons. Living together in the farmhouse, the family thrives, as does the farm. But given the times, this harmony won’t last.

The family’s main antagonist is a racist doctor, all-powerful in the community, who aims to gain control of the profitable farm by marrying his daughter to Matthew, who detests her. That problem is seemingly resolved by a plan devised by the youngest brother, Luke, but ultimately has painful results.

The middle brother Paul, realizing that, “in the end, he was just a slave,” flees to New York, where he struggles to make a living, joins the fight for freedom, and falls in love.

As war begins, Luke remains dedicated to the farm, while Paul climbs abolitionist ranks in the North and Matt, strangely, joins the Confederate Army, deserts, and, stranger still, is saved from a firing squad by Robert E. Lee’s intervention.

The story contains an excess of improbable coincidences and complexities, and readers may struggle to track the lives of the multiple characters, a problem exacerbated by shifts in individual attitudes that often come without transition. Matt’s journey from bullied abolitionist to Confederate war hero and back again, for instance, is particularly hard to understand.

Holding things together is the author’s strong attention to character and the historical authenticity of many episodes, especially the New York draft riots and the reactions of Southerners, white and black, to the twisted circumstances of their lives.