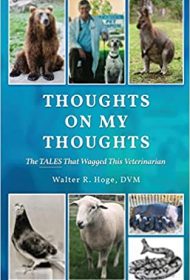 In Thoughts on My Thoughts, an American veterinarian in practice since 1973 recollects the loved ones—humans and animals—who helped him craft a fulfilling life of service.

Born in Blackfoot, Idaho, Walter Hoge was the son of the local surgeon and general practitioner who encouraged Walter to pursue his interest in animal welfare. Hoge remembers fondly when his father attended a pig Hoge had raised as she struggled to give birth. “He knelt in a stall full of straw and muck and saved the day by helping Miss Royal Charm IV deliver a fine litter. What more could you ask from a father?”

Hoge graduated with his DVM from Purdue University and married his high school sweetheart Sheryl. They had trouble conceiving and adopted a baby boy, then had four more children of their own. Hoge worked 40-plus years in the same California veterinarian office, including 12 years working alongside his son.

In rambling prose, interspersed with lyrics of American popular music and Bible stories, Walter recounts memorable moments in his life: assisting, while in high school, with electroconvulsive treatments at an Idaho state mental hospital; courting Sheryl; saving a wallaby from being euthanized for aggression— and much more. There’s no discernible storytelling arc, and Hoge wanders far afield from his own life; for example, offering a discussion of the Radium Girls—women poisoned by radiation while working in watch factories—followed by the story of pop icon Frankie Lymon’s heroin addiction.

This book’s subtitle and jacket suggest a James Herriot-style memoir of the animals and owners that influenced the author. This is, rather, a recognition of the beings that shaped him. It’s not always clear how the camels, rattlesnakes, sheep, bees, black bears, beavers, pigs, and pigeons mentioned did the shaping, but obviously he’s trying to impart a lesson.

Hoge clearly demonstrates his ability to love and learn from everything around him. However, the book requires thorough editing to draw a wide audience.