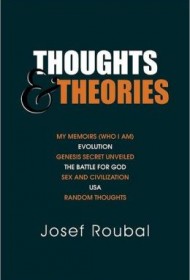 Josef Roubal waxes philosophic in Thoughts and Theories, a collection of loosely linked, politically conservative essays that explore everything from his own childhood to creationism, sex in modern civilization, feminism, freedom and the United States, economics and whether or not TV causes autism.

Born in Czechoslovakia in 1948 to politically active parents caught up in the oppressive regime of post World War II communists, Roubal focuses most of his attention on drawing parallels between religion, politics and science. While most readers will find little that is new here, the author’s idea that the story of Genesis is a blue print for evolution is thought provoking. Unfortunately, Roubal’s hypothesis is undermined by a stream-of-consciousness approach that never probes the depth needed to make it a meaningful theory.

The most interesting parts of his book are those where Roubal recalls personal stories of growing up under the all-searching eyes of Soviet authorities. Tales of his father, jailed on a number occasions by the state police, are poignant and witty. One wishes the author had spent more time reflecting on Eastern Europe in the ’50s and ’60s and his parents’ efforts to assist a number of people to escape to the West than on matters of church and state.

Although English is the author’s second language, Roubal is a skilled storyteller who has a handle on creating a narrative arc. Unfortunately, his prose style needs much refining. At times, his syntax is confusing (e.g. “The purpose of the certificate is to remind us when we get arrogant and start thinking that we are smarter than he is that we are not.”). Further, there are numerous grammatical problems throughout the book.

Roubal, who spent years manufacturing instruments for cardiovascular research, is intelligent and his heart is in the right place, but he needs a well-equipped editor to help make his life and mind shine on the page.