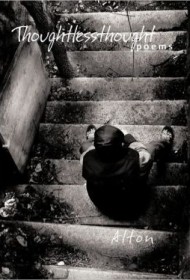 Poetry is mostly born of experience, and there is no dearth of material — or lack of inspiration — in the self-described “crazy ass old sailor” Alton’s new book of poetry, Thoughtlessthought. In this collection, Alton delivers interesting, sometimes daring poems that tell the stories he’s witnessed and the things he’s wondered.

Alton is a keen observer, and it shows in these poems. There’s a nice mix of humor (“New Orleans Night”), moving portraits of individuals (“Snapshot”, “The Bum”), and personal reflections (“Empty Place”). Many of the poems are delivered in quatrains with some sort of end-rhyming scheme, but to his credit, Alton is not afraid to experiment with other styles, too, including the amusing short poem “He Said”: Shakespeare/”To be or not to be”/Aristotle/”To be is to do”/Einstein/”To do is to be”/Sinatra/”To be do be do.”

It’s not a perfect book. For example, the first word of the poem “Nothing Is Nothing” is written as “NOYHING”; another proofreading pass-through might have helped to keep the focus on the poems themselves, rather than on the occasional typo or misspelling. But Alton’s voice is genuine, and when he describes a calm day of catfishing (“Sumthin’ Fishy”) or a violent encounter (“City Beat”), the details ring as true and clear as a morning bell.

Thoughtlessthought also includes black-and-white photos scattered throughout the book. The author has arranged and used them effectively to emphasize the emotional content of his poems.

There’s a sense of grit and determination, but also a sense of peace in Alton’s poetry, like a man who’s learned what he knows through experience. They’re simple poems, but many will bring a smile and quite a few pack a wallop.