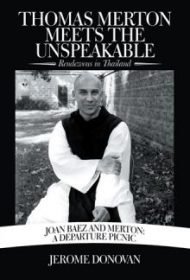 Thomas Merton, the subject of Jerome Donovan’s biography/memoir, is a voice of the 1960s that has largely faded from public consciousness. Here, Donovan introduces readers to the spiritual thinker and presents a hypothesis about Merton’s death.

Merton was an American Trappist monk, social critic, writer, poet and peace activist whose curious death in 1968 at a religious conference in Thailand has always puzzled his followers. Merton was found dead on the floor of his cottage, a floor-model fan lying on top of him. Police claimed the fan had an electrical wiring problem that shocked him. However, Donovan posits that Merton was killed by the U.S. government for his anti-war activities, a theory suggested by others over the years.

Donovan’s trip to this cottage in Thailand is central to the book. He and his wife had just a one-day layover in Bangkok; thus, their trip wasn’t an extensive investigation. Still, the author discovered one new nugget: a 2008 Thai magazine interview with a nurse who was among the first on the scene after Merton’s death. She claims U.S. military troops arrived around 4 a.m. to remove Merton’s body. Donovan had the article professionally translated and uses it to bolster his case for U.S. government complicity.

The book also includes an interview with singer/political activist Joan Baez, who with colleague Ira Sandperl, visited Merton at his monastery before he headed to Thailand. While not a Merton expert, Baez adds some perspective.

Donovan is a competent, generally easy-to-follow writer. But at only 70 pages, his book lacks depth. His suggestion that the U.S. was involved with Merton’s death is interesting, like most conspiracy theories, but it comes across as just a theory, without much solid supporting evidence.

The book would have been stronger with more Merton detail and less extraneous material, such as the pages devoted to the Dartmouth Conferences. Still, Donovan lists other sources of information on Merton, which interested readers could seek out for further study.