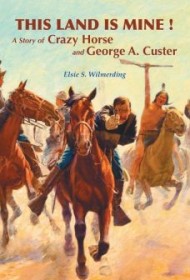 Complete with pictures, a timeline, and primary source material, Wilmerding offers young readers an engaging depiction of the lives and battles of Crazy Horse and George A. Custer in her textbook-style narrative, This Land is Mine!

Strong prose and rich detail bring new life to these two American heroes, and convincingly imagine their unique cultures and childhoods. Each character is given a vivid backstory, which manages to avoid overly glamorizing either man’s legacy. Colorful stories of Crazy Horse’s life on the plains hunting buffalo and having visions of valor are balanced by tales of young Custer’s single-minded determination to be a soldier and attend West Point. Thus, readers are allowed to see the humanity of each man and recognize the similarities between them.

The author admits in her introduction that the narrative relies on fiction in order to fill in the gaps between historically documented events and to add flavor. Unfortunately, she does not provide footnotes throughout the text to signal when fact gives way to fiction, which tarnishes the historical reliability. Though formatted as a textbook, This Land is Mine! reads like a fictional retelling more than chronicled fact. With more careful documentation, the dialogue and internal thoughts of characters, as well as some details of childhood experiences, would not cause adult readers to question the book’s authority.

The back cover notes that the story is aimed at children ages 11 and above. The vocabulary used may be challenging for the younger readers, and though never gratuitous, battle scenes and the violence of the time are depicted frankly. The author refers to mutilated bodies after battles and describes a battlefield “bloody and steaming with death.”

Overall, the artwork, photography and historical call-outs, along with the novel-like prose and interesting subject, make this an engrossing and informative read.