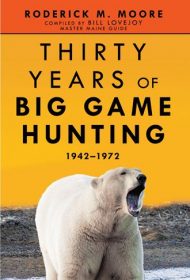 One rainy day, Roderick Moore started making a list of every animal he’d killed from 1942 to 1972. That tally—31 deer, 14 moose, 29 caribou, one polar bear and numerous seals and walruses—along with his memories of each hunt, became Thirty Years of Big Game Hunting.

Moore spent 24 years living and hunting in Maine and 20 years in Alaska. His book begins with the aforementioned list of his kills with brief descriptions: “125-pound doe. .30-30. Shot a skunk in trap several times on top of the bank in Stan Weymouth’s pine woods just before shooting doe…”

It then offers a chapter for each hunt, arranged chronologically by his age. For example, the first chapter is titled “My First Deer (Fall 1943)” and subtitled “Fourteen Years Old.” It recounts a difficult kill, requiring multiple shots. “I opened it up and hit it twice in the paunch,” Moore recalls, “and once in the chest to put it down. There wasn’t a whole gut left in it.”

In Alaska, he often hunted with the native Inuit people. These stories provide the book’s best narratives, such as the day Moore and his Inuit friends were caught on an ice floe by over 200 charging walruses. The hunters fired an estimated 444 shots into the water ahead of the surging mass to turn the threatening herd away. “Unbelievable? Yes,” Moore writes, “but so was the whole thing…to me.”

While some stories are riveting, Moore’s writing style assumes readers already know his cast of characters and locations. (One entry mentions a hunt “down back of Harry Kirk’s, between the Piscataquis River and the railroad tracks.” Who is Harry Kirk? And where is the Piscataquis River?) This severely limits the book’s audience.

Fortunately, Moore explains that he wrote this book for his sons, hoping they may “get something of value from it to apply to their own hunting days in the future.” They will certainly appreciate this compilation.