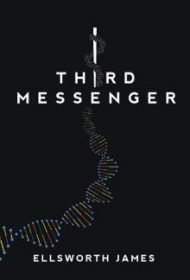 Ellsworth James boasts backgrounds in forensic psychology and the military, in addition to other endeavors—a diverse combination that serves him well in this complex but eminently readable thriller combining medical breakthroughs with corporate intrigue.

The story recalls Robin Cook’s bestselling medical thrillers (Coma, etc.) infused with the hyperkinetic techno-thriller style of the late Michael Crichton (Next, etc.). There’s a byzantine cast, but the big bad is Andrew Glass, the ambitious and utterly unscrupulous CEO of Steele Pharmaceuticals, at war with the FDA between what’s right and what’s profitable.

Our protagonist is Will Connors, a noble, brilliant but disgraced scientist. Staring down the barrel of his daughter’s leukemia, he’s willing to do whatever it takes to find a cure. That’s why he’s intrigued by an invitation to Steele’s secret laboratory in Guatemala where scientists have discovered an ancient plant with the potential to transform human existence, including the ability to heal spinal cord injuries, cure world hunger, manipulate genetics and achieve one of science’s darkest ambitions: immortality. Is there a potentially catastrophic cost for this breakthrough?

The plot is overloaded, featuring industrial espionage and corporate corruption, and exploring what individual characters will do to achieve their own goals. The latter include a tough-as-nails security agent; the fellow scientist helping Connors with his research; a private investigator; a criminal who operates on the edge of the industry’s more malevolent markets; a dogged investigative journalist; the inevitable murderous enforcer, and a variety of victims who come to bad ends.

The intricate plot can feel overwhelming at times, but James’ prose is clear and efficient, his characters fully believable in a cinematic fashion, and his pseudo-scientific thrills plausible. Demonstrating Crichton’s unique and much-missed talent for working out the mechanics of his world while recognizing the inherent threat in technology gone awry, this novel is an enjoyable post-modern update of the classic thrillers that employ technology as a menace. Scary stuff indeed.