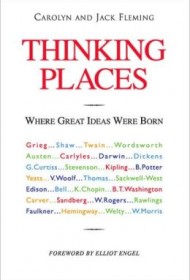 Carolyn and Jack Fleming have spent many years tracking down the retreats of famous writers and other creative people to look at where they did the thinking that produced their most memorable works and ideas. In Thinking Places: Where Great Ideas Were Born, the pair examines the lives and working habits of about 30 of these creative figures on both sides of the Atlantic to produce what they describe in an authors’ note as a “literary travel book.”

Following a set format, the authors briefly describe the journey to each subject’s home, write profiles of each person, and then describe the creative individual’s special “thinking places.”

The book starts strongly, focusing on about a dozen British writers, such as Jane Austen, William Wordsworth, Charles Dickens and Rudyard Kipling. However, in the United States, the Flemings lose direction by indulging in such random choices as aviation pioneer Glenn Curtis, civil rights advocate Booker T. Washington, and agricultural scientist George Washington Carver. Though certainly interesting and creative in their own right, their inclusion dilutes the “literary travel” label and the book’s focus.

This alone could be forgiven, but the authors also pad the book with trivial and irrelevant information about places they visited, where they stayed, meals they ate, and people they met. They even struggle at times to make their case. At the home of Beatrix Potter, for example, they spy a chair and desk “which may have been one of her thinking places,” while Jane Carlyle’s “was probably in her bedroom.”

The book contains several glaring errors, including misspelling the names of two of the chosen subjects: British writer Vita Sackville-West, who appears several times, including on the book’s cover, as Sackwell-West, and American poet and writer Carl Sandburg, who sometimes becomes Sandberg.

A long list of acknowledgements and 12 pages of bibliography testify to the Flemings’ extensive research. Unfortunately, that prodigious work hasn’t cohered into a fully satisfying read.