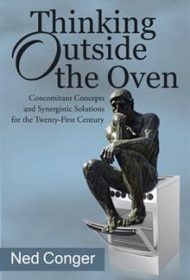 Author Ned Conger, now retired, forged an impressive career as a naval intelligence officer and program analyst assistant to the F/A-18 strike-fighter jet program. In this book, he offers his solutions to various problems he has observed.

In 58 chapters averaging just two pages each, Conger suggests roughly 58 solutions to 58 situations that concern the author.  Mostly, these are ostensibly serious ideas to solve serious problems. For example, regarding climate change, he believes covering large swaths of land with some nontoxic white substance could reflect light and heat away from Earth. To deal with avian flu, he suggests that surgical masks, disinfectants for public doorknobs and antiseptic hand lotion provided on demand might help.

It’s hard to tell how serious Conger is, however, when he proposes a program similar to the Depression-era Civilian Conservation Corps, in which prisoners would create wetlands by strategically placing old tires, mud and sand in shallow estuaries. Another idea proposes painting highway surfaces with advertising to assist motorists in finding a cup of coffee. Using white paint for this project would help with global warming, an example of a “synergistic” solution to multiple problems. Still another proposal would somehow harness the energy of randomly exploding grain elevators.

Who would organize, fund and carry out these programs?  He doesn’t say. Would they work? That’s highly debatable. The book’s title is apparently a play on “half-baked ideas”; he acknowledges readers might consider his offerings as such. Others, the author concedes, should take his notions and do the work to actually develop them.

Conger is earnest and well-meaning and blessedly writes without an ideological bent. But with few facts and even fewer specifics, this book reads a bit like the ideas creative college students toss around at 2 a.m.