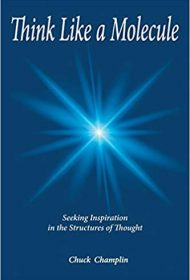 For as long as humans have formulated questions such as “what is reality?” and “what is my purpose?” there have been myriad variations on the answer. Author Chuck Champlin offers his own in Think Like a Molecule.

Champlin’s proposal is grounded in his thesis that everything in the universe is driven by a single force that itself stems from a singular infinitesimal, indefinable notion. While other philosophers have made similar proposals, Champlin’s novel approach is to compare this notion to how a molecule (the smallest particle of a substance composed of one or more atoms) “thinks.” In other words, every thought, action, etc., is set into motion by a single conceptual marker for thought that he calls a “twinkle.”

As an example of a “twinkle,” Champlin asks readers to recall instances in their lives where an “aha” moment eventually blossomed into clarification, such as when someone makes a seemingly random observation (ex., when Buckminster Fuller noted that structures in nature are built in lightweight networks, not heavy solid materials) and follows that thread of thought in a groundbreaking manner (such as Fuller’s quintessential geodesic dome architecture), or, more simply, when someone who repeatedly experiments with cooking comes to realize they want to be a chef.

While Champlin’s foundational knowledge is heavy in the sciences, he minimizes techspeak and jargon; the book has a conversational tone that makes it easily accessible.

Calling upon his personal knowledge, the author adeptly quotes from diverse sources, such as the works of William Blake, Rene Descartes, and Charles Darwin. He also draws on familiar cultural touchstones, including the pixie dust surrounding Cinderella’s transformation in the Disney movie.
.
With his philosophy, Champlin competes in a crowded arena of theorists who have debated the greatest philosophical conundrums. This offering, while not groundbreaking, gives inquiring minds a fresh perspective.

As such, Think Like a Molecule is worthy of a place in any collection of esoteric reading material.