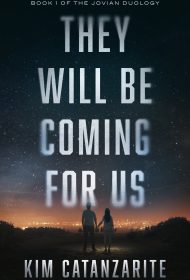 Kim Catanzarite’s They Will Be Coming for Us holds readers spellbound as it straddles several genres. First and foremost, it’s a love story. But it’s set in a science fiction narrative and reads like a thriller, even though there’s no violence.

The love story introduces the book. It begins with a young woman, Svetlana, or “Sveta,” a Russian adoptee who works in an ice cream shop in a small Pennsylvania town. The town has been overrun by UFO enthusiasts during an annual summer festival that celebrates a supposed 1960s landing of a spacecraft near the town.

During this crazy festival that boasts thousands of people dressed as aliens and sci-fi characters, Sveta meets Andrew Jovian. He helps her when she becomes overwhelmed at the ice cream shop, and the two – somewhat improbably – fall in love at first sight. They immediately become inseparable, and before you know it, she’s introduced to the wealthy Jovian family. Andrew’s father founded an aerospace company that works with NASA, and they’re the town’s “royalty.”

The suspense starts building when Sveta senses something odd about members of the Jovian clan and feels uncomfortable around them, but within months, Sveta and Andrew are married.

The novel’s sci-fi element runs throughout the story with the entire Jovian family’s obsession with stars, space and the night sky, and becomes much more shocking as the chapters fly by. The twists are too good for spoilers, but there’s a tip for astute readers: the family’s name.

The excellent writing draws readers in with its quick clip and snappy dialogue. Catanzarite offers terrific turns of phrase, such as “Her dark eyes have something strong like black coffee brewing in them,” or “I am a fish out of water in frantic search of a pool or puddle I can leap into.”

As it skillfully blends genres, They Will Be Coming for Us offers both quality writing and an irresistible story—a winning combination all around.