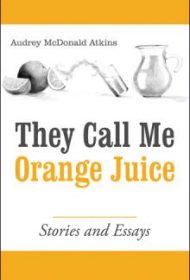 Regional differences in the U.S. can make states feel like foreign countries, and the differences are especially vivid in the American South. Author Audrey Atkins set out to demystify her life in Alabama with a blog called “Folkways Nowadays,” and has now collected several of those short pieces in a book. They Call Me Orange Juice is a pleasure front to back: insightful, funny, and chockablock with Southern hospitality.

Atkins writes in a confiding, chatty voice about topics readers might associate with Southern living: the accents, the how-to of proper cornbread and the what-to-do of okra (pro tip: if it’s pickled, don’t put it in soup), the humidity and the havoc it wreaks on one’s hair. She makes a case for civil behavior, defending folks who call her “ma’am,” but don’t mistake her politeness for passivity; she calls out bullies, racists, internet trolls and the generally intolerant with full-throated ire. By embracing the Southern clichés we expect, Atkins routinely turns them on their heads, offering us a more complete picture.

There are a handful of recipes (the Nilla Wafer-based rum balls sound especially delicious), family stories and tall tales. On a good day, Atkins “(F)elt like I could conquer the universe with my feminine wiles, disarming wit, and a pocketknife.” She mentions dreaming of the big city writers of the Algonquin Round Table, then reminds us that Harper Lee and Truman Capote were Southern to the bone and did all right by the world of literature. While there are a few typos, crisp editing makes reading a pleasure.

Fans of Lisa Scottoline’s short personal essays will love the humor and heart evident in They Call Me Orange Juice. It’s a perfect pick-me-up and antidote to the daily grind. Readers will love it, and likely want more.