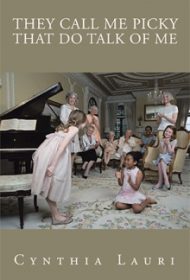 Cynthia Lauri, a woman in her seventh decade, looks back at her lifelong struggles with weight and her difficulty finding the perfect man in They Call Me Picky That Do Talk of Me.

Lauri grew up outside of Pittsburgh in an Italian-American family where food was “front and center.” Self-described as “just slightly pudgy” back then, she took an early interest in boys.

The author, a graduate of Carnegie-Mellon University, showed promise as an opera singer and had some success in that arena, but her focus on finding the right man superseded her desire for career success. As her weight yo-yoed up and down, she persisted in trying to attract “Mr. Right,” leading others to say that she was being too picky about her marriage. “And so began the pattern of looking for love and acceptance and believing it was all wrapped up in how much I weighed,” she reflected. She admits to making several poor choices that resulted in a failed marriage, unplanned pregnancy, and health issues, leading to lifelong sadness and frustration.

Lauri’s memoir mostly is told chronologically in a flat tone. While grammatically sound, it’s written without chapter divisions, which can make readers long for some natural breaking points.  First-person anecdotes are thinly developed, lacking sensory or descriptive details that could have breathed life into the information she imparts. Further, the narrative contains no dialogue, just prose showing only her view of every situation. Ultimately, the narrative reads more like the author’s cathartic reflection of her life, as opposed to prose artfully crafted for a general audience.

While the book may have some appeal to others for whom weight issues have been a lifelong struggle, it fails to offer any keen insights or universal message that would give it emotional resonance. As such, it is likely to have limited readership.