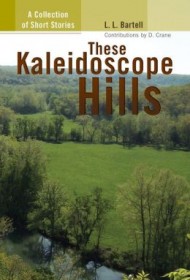 As June (Moulder) Slusser lay dying in August 2001, her large, saddened family gathered to keep vigil at the hospital. They took turns at June’s bedside and told family stories. This book by L.L. Bartell, June’s daughter, is a collection of such treasured family memories, beginning with the 1905 marriage of Lonnie Moulder and Myrtle Gerhardt, who settled on a farm called Happy Holler in Missouri’s Ozark Mountain region. Their lives are the sturdy centerpiece from which all other stories flow. June was the youngest of their 11 children.

Life on the Moulders’ farm was hard, unrelieved by any convenience, but parents and children worked side by side planting, raising chickens and pigs, trapping and putting up hundreds of jars of food each year. Lonnie was the unquestioned, though benevolent, head of the family.

These stories include moments of laughter and poignant glimpses into the family’s heart. When June married, for example, her mother gave her 75 cents she had earned selling eggs, tightly wrapped in a handkerchief as a wedding gift. It was such a generous present that June didn’t want to accept it. The Moulders were God-fearing Baptists; Lonnie always prayed over his crops and lost only one planting in a flood.

The book’s tone is engaging, and Bartell’s voice is fresh, but the frequent misspellings, dropped letters and poorly constructed sentences hamper reading enjoyment. These Kaleidoscope Hills would benefit immensely from an editor, or at least a proofreader.

Nonetheless, these stories comprise a beautiful portrait of a loving, hardworking family. The collection could have regional appeal and would be an ideal subject for any teen reading group interested in discussing a woman’s role in the early 20th century. It also could prompt other, more offbeat, questions, such as, “What are pickled pigs’ feet and why would anyone eat them?”