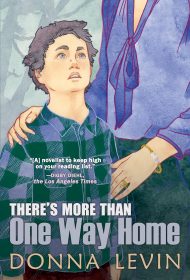 When Jack, a young boy with Asperger’s syndrome, is accused of killing a classmate, his parents grapple with the angry aftermath as well as marital trouble in the engrossing and vibrant novel, There’s More Than One Way Home.

The story begins with an elementary school group’s field trip to a San Francisco area island, a trip Jack’s mom, Anna Kagan, is helping supervise. The trip turns tragic when Jack and three other boys go missing. When found, one is dead and the others are blaming Jack.

Sudden widespread distrust and vicious rumors jar the family members, particularly Jack’s well-known father, Alex, who is running for district attorney. Then Anna and Alex’s marriage frays when Anna unexpectedly falls for the kind and spirited Dr. Valentine, who offers help when Jack is ordered to a psych ward.

This standout book delivers a tightly woven plot that unwinds through dramatic scenes rendered with depth. It skillfully portrays the characteristics of Asperger’s, as Jack moves with a jerky gait, talks wildly and carries a pawn to stay calm. Meanwhile, complex characters, vivid in temperament, behavior and dialogue, populate the story, making it easy to engage with the narrative. Readers will have no difficulty opening themselves up to Anna’s heart—her pain, fears for her son, and the secret thrill of finding love outside of her frazzled marriage.

The author is adept at slipping in well-chosen, unforced analogies that add further texture to the narrative. When Anna decided to ignore a suspicion “. . . I mentally plugged my ears like Odysseus against the sirens.” And despite the couple’s icy discord, “. . .Jack was happily oblivious to the shaky rope bridge slung between me [Anna] and Alex.”

In all, this is a smart, wise and big-hearted book. With the right marketing strategy, There’s More Than One Way Home could easily be a bestseller.

BlueInk Heads-Up: The Star designation is offered with the recognition that minor editing issues (occasional missing or repeated words, etc.) remain in need of attention.