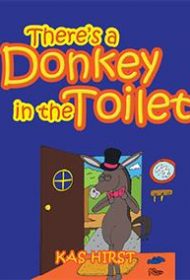 Kas Hirst’s rhyming picture book celebrates the antics of a donkey that gets into mischief inside the house and in the garden before the lively beast settles safely in the paddock.

The repetition of “There’s a donkey in…” is fun to read, and the notion of a donkey indoors is giggle-worthy for preschoolers, both when the animal engages in human pastimes such as reading the newspaper or when the donkey is silly enough to eat bars of soap. Some of the activities, though, like walking on hallway tiles, are not particularly imaginative.

Unfortunately, the book also has some technical problems. Except for exclamation marks and apostrophes, the text is almost entirely unpunctuated, and the author uses capitalization inconsistently and incorrectly. (The first letter of line two in each stanza is inexplicably capitalized, while the next line, which continues the thought, begins in the lower case.) American readers may also find the title confusing, as it suggests that the donkey is in the toilet bowl. British and Commonwealth readers will more immediately recognize that the animal is in the bathroom.

Despite such issues, young readers will eagerly go along with the fun. While requiring more technical polish, There’s a Donkey in the Toilet provides a lighthearted story that children will enjoy hearing read aloud.