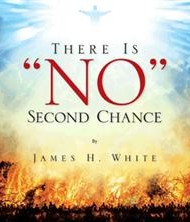 In the jungles of Vietnam, a young soldier had a vision of Jesus Christ weeping over the devastation of the Vietnam War. After decades of wondering why the vision was given to him, retired military officer James H. White believes he may have his answer: The supernatural vision strengthened his faith, which in turn motivated him to write There is “NO” Second Chance, an urgent plea for people to repent and get their lives right with God before it’s too late.

While most books open with a hook that draws you into the story, action or topic, White takes a different approach. His book begins with definitions of two words presented in large bold type: “REPENT” and “REPENTANCE.” It’s fairly obvious where the book is headed from here. White teaches that “being religious is not enough to save you.”  Sorrow, penance and reformation won’t guarantee you a spot in heaven, either. Salvation requires true repentance from every believer, which is evidenced by a “change of mind…heart…[and] will.”  White cautions that once we die, it’s too late. We must experience true repentance now.

Though White’s intentions are admirable and the driving force behind the book is biblically sound, his end product is barely more than an outline for what could be a more substantial work. Statements such as, “Paul is a good illustration of repentance from dead works” stand alone with little to no elaboration. The chapters are extremely short (Chapter Seven is a mere 13 words long), and poor grammar and confusing sentences mar the pages (i.e., “The Lord is not slack concerning his promise, as some men count slackness; but it is long-suffering to us, not willing that any should perish but that all should come to repentance.”)

The message of White’s book is important and relevant, especially to the Christian community. However, its delivery is weak, and the book is likely to disappoint those looking for an edifying exploration of the topic.