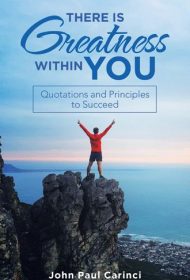 If you believe you are born to fail, John Paul Carinci would likely agree. That’s because in his view, mindset trumps all. Success is all about nurturing a positive attitude, he writes in his self-help book, There is Greatness Within You.

Carinci opens the book with a chapter on motivation and later exhorts us to appreciate the power of the mind, cultivate an all-consuming desire to succeed and avoid negativity. He lauds the notion of perseverance and the ability to birth success from failure.

Carinci is no stranger to the motivational genre; this is his fourth self-help book. Here, he offers plentiful real-life examples and quotations from others to show the power of resiliency and determination. For example, he notes that J.K. Rowling survived countless book proposal rejections, bankruptcy, divorce and penury before her Harry Potter series became a bestseller. He provides NBA legend Michael Jordan’s comment that he’s “failed over and over again. And that is why I succeed,” and introduces readers to Wilson Gretbatch, who, while aiming to invent a device to record human heart beats, discovered how to create the very first implantable pacemaker.

Such anecdotes and quotes are, indeed, motivational, as are recurring short sidebars with the headers “You Are the Greatest Living Miracle in the World,” and We Were All Born Able to Achieve Greatness.”

This is not a book, however, likely to satisfy those looking for step-by-step tips on how to achieve their goals. The author’s advice is generally broad and overly familiar. For example, he tells worried readers to ask themselves: “What is the worst possible thing that could happen?” To tamp down negativity, he suggests, “Take life one day at a time.” Such bromides won’t provide much relief to those mired in serious self-defeating issues.

Still, Carinci provides copious stories that will lift the spirits of those who are momentarily discouraged. Such readers are sure to find renewed hope in these pages.