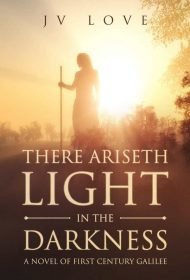 Love and forgiveness are the overarching messages in JV Love’s historical novel There Ariseth  Light in the Darkness. To tell his story, he follows three diverse characters concurrent to the timeframe of the life and ministry of Jesus Christ of Galilee.

Jonah is a Jew who, because of a tragedy in childhood, becomes embittered and doubts the God of his forefathers. Vitus is a Roman soldier who moves through the ranks to become a Centurion who serves the prefect Pontius Pilate. Azara is a beautiful Gentile who has been raised by and travels with her father throughout the Middle Eastern regions, eventually causing scandal when she opens a school for young girls and women.

The story tracks these key characters over decades, but all eventually encounter students of a mysterious rabbi who preaches goodness and mercy. Whether historical or fictional, the students influence the main protagonists until eventually they, too, encounter the young rabbi, Jesus, and make their own decisions about his teachings.

Author Love creates an absorbing story that sweeps readers from the first pages into the lives of the people of first-century Galilee. The author’s research into the area, culture and religious beliefs is apparent, with century-appropriate vocabulary and meticulously accurate descriptions of the architecture, food, and geography (e.g., “Everything was a varying shade of beige, from the sun-bleached rocky slopes to the sandy hills that towered all around. There was very little green to be found anywhere—just tiny pockets of half-dead cedar trees and grass lucky enough to be in the shade.”)

Biblical characters are depicted in an accessible, everyday way, and Love documents this work with an extensive chapter-by-chapter notes section.

A tale written from the viewpoint of three different characters could easily be jarring to readers, but Love makes those transitions effortlessly. All told, the story is engaging, delivering important messages about forgiveness and love. Anyone interested in the history of the period will find this a satisfying read.