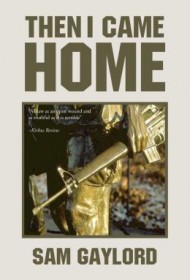 Author Sam Gaylord’s experiences in Vietnam form the centerpiece of this memoir.

Gaylord was born in wretched poverty in rural Bethlehem, Ind. His family lived in a shack – no electricity, no plumbing, and often no food. (In one passage, he recounts scrounging through coffee grounds his mother had thrown into the snow. “I would run out and start eating them before they got dirty.”)

Looking for a way out, he joined the Marines in 1967. But his tour of duty was not the escape he had hoped for. War – the ever-present danger, death of buddies, constant heat and humidity, leeches and snakes and seeming ineptitude of his superiors – truly was hell for this 18-year-old.

Then came the defining moment of his life: On June 21, 1968, just after his 19th birthday, he lost both feet in an explosion. Gaylord was in critical condition for two weeks before being evacuated. His recovery was slow and painful, and he considered suicide at one point. But at his lowest, he resolved to fight, turning himself over to God.

Although Gaylord’s story is poignant, his memoir presents some obstacles to enjoyment. The book could have used closer editing, as the story tends to meander. There are also some nettlesome errors in grammar and a few glaring mistakes (the author refers to Gen. William Westmoreland as Wes Moreland, for example).

A larger problem is the story’s sudden end. In a postscript, readers learn that Gaylord received a college degree, worked to help veterans and is a self-employed businessman. It would seem he has lived a productive, successful life, but readers aren’t offered this perspective. More passages detailing his apparent triumph would have added much to the memoir.

Overall, Gaylord’s book offers some interesting stories. The downside is that we have heard variations of them before. Information about how Gaylord coped upon his return would have provided a fresher take on the story of Vietnam and the terrible tragedies it wrought.