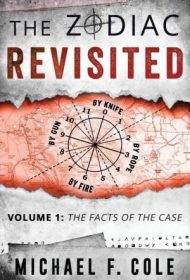 Michael Cole’s The Zodiac Revisited is the first of a three-volume, true crime series exploring the crimes and communiques of one of America’s most prolific and elusive serial killers: the Zodiac.

In the late 1960s, through 1970s, a string of seemingly random murders were committed throughout California. With few leads, police were baffled. The killer, who dubbed himself “the Zodiac,” relished publicly mocking the police he eluded, sending officers and newspaper editors handwritten, cryptic notes. Included were complicated ciphers, threats of further violence, tallies of his victims, and demands that his writings be published. Eventually, his communication waned, and abruptly ended in 1974. He has never been identified.

Cole’s narrative is a basic guide through the Zodiac’s crimes and missives. Comprised of details about the murders, pictures of letters and ciphers, and introductions to the detectives and journalists involved, it’s comprehensive and well-written, although it stops shy of delivering keen insight or thought-provoking speculation. With such scant progress having been made in the case, Volume 1 offers little new information, such as a brief footnote acknowledging that the Zodiac’s last cipher was solved in 2020.

Frustratingly, when Cole touches on a subject requiring further exploration, he often leaves it to his later volumes to fill in the gaps. For example, he discusses a woman who was kidnapped, but managed to escape. Later, the woman identified a sketch of the Zodiac on the police station wall. In a footnote, the author states, “Some people choose to disbelieve Kathleen’s recounting of these events…”, referring readers to Volume 3 for more insight, without a hint of explanation about why her identification is controversial.

The Zodiac story has been the subject of countless books, films, and websites dedicated to cracking the code and solving its mystery. While those familiar with the serial killer’s crimes won’t find much new here, it could serve as a helpful and complete reference guide for the newly interested.