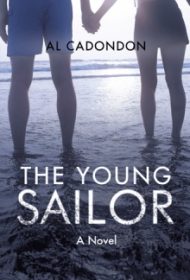 The title of this novel’s first chapter, “A Happy-Go-Lucky Sailor,” provides an apt description of the story’s main character: an amiable young man originally from the Philippines who joins the U.S. Navy to see the world and live the adage of having a girl in every port.

The story begins in Boston, where protagonist Albert is initially stationed. Here, he falls in love for the first time. His travels, both work related and personal, take him to Norfolk, VA., the Mediterranean, Cuba, New York City, Manilla and Washington state. Wherever he is, women are drawn to Albert’s smile, wavy hair and charm. He frequently becomes enamored with the females he meets.

Despite numerous encounters with women, Albert initially continues to profess his devotion to his first love—that is, until he meets Glenda, a high school senior whose father disapproves of Albert primarily because he objects his daughter’s involvement in a mixed-race relationship. Albert’s attraction to Glenda, however, does little to deter his fascination with other women. As the story progresses, Albert plans to attend college and realizes he needs to decide about his future with Glenda.

Unfortunately, several issues overshadow the thin plot. The dialogue is stilted (for example, this pickup line: “Oh you look younger than your age and you are quite pretty”). Numerous superfluous details, such as the weight and height of nearly every character, fail to drive the story. Inconsistencies related to the passage of time (e.g., at one point, Albert leaves work early and goes on a walk with Glenda “under the brilliant light of the rising sun.”) Several typos are also major distractions.

Readers may appreciate the main character’s easy-going manner and ability to befriend nearly everyone he meets. But his habit of being so quickly smitten and lack of commitment is also disconcerting, rendering him an unsympathetic character.

This, and the story’s other flaws, hamper reader enjoyment. As a result, the novel is likely to have limited appeal.