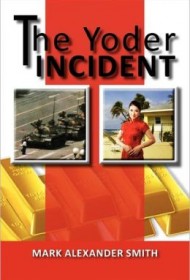 Mark Alexander Smith’s bio notes that he is a writer and educator who has taught all over the world. Considering Smith’s professional achievements, his debut novel, The Yoder incident, is a surprising disappointment. His story is filled with implausible plot twists and other storytelling distractions.

Jaegan Yoder is a high school English teacher in Saskatoon, Saskatchewan Canada. Driving to his cabin one afternoon, he encounters an accident involving a logging truck and a Brinks van containing $2.8 million in gold bricks and cash. He quickly ascertains that the truck driver and Brinks employees are dead, and with little hesitation steals the van’s contents, later burying everything beneath his cabin. Yoder is questioned by a Brinks insurance investigator who believes he took the money but can’t prove it.

Spring forward one year. While fishing near his cabin, Yoder happens upon an overturned canoe and two unconscious boys. He rushes them to the hospital and meets Jia Liang, a young doctor who is only able to save one boy. What follows are more jumps in time and the unveiling of some far-fetched coincidences (for example, it turns out that Yoder rescuing the boys was merely Smith’s way of introducing Jia as his love interest).

Yoder eventually unloads the stolen gold for shares in a company called Bre-x–the same Bre-x behind the “biggest gold fraud in history” back in the ’90s. He later sells the shares, becoming an instant multi-millionaire. Feeling invincible, Yoder then decides to rescue Jia’s brother, a political prisoner in China, and smuggle him into Canada–an inconceivable plot point that may cause readers to stop right there.

Smith’s novel is imaginative, with vivid descriptions of the Canadian landscape. But the story is imaginative to the point of implausible, with sections of superfluous dialogue, abundant telling (rather than showing) and a few illogical point-of-view shifts. All of these combined make the book, at times, a tedious read.