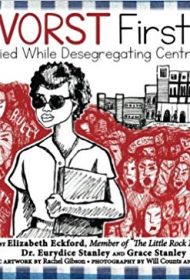 On September 4, 1957, Elizabeth Eckford, a lone African American girl, braved an angry mob and the Arkansas National Guard while attempting to enter Little Rock Central High School. The Worst First Day, by Eckford, Dr. Eurydice Stanley and Grace Stanley, is the story of how Eckford and eight other courageous African American students, in the wake of the Supreme Court’s 1954 ruling against the segregation of students in public schools (Brown v. Board of Education of Topeka, Kansas), persevered in attending an all-white high school.

The authors tell how the governor of Arkansas instigated unrest and deployed the Arkansas National Guard to keep the African American students from entering the school. Writing in rhyme from Eckford’s perspective, they describe the extreme hostility of the white crowd blocking the school entrance. One woman spat on Eckford and “several segregationists yelled, ‘Lynch her!’”

In addition to such first-person recollections, the authors offer historical context through informational sidebars. Thus, readers learn how President Eisenhower directed the 101st Airborne army division to protect the “Little Rock Nine,” and how the NAACP lent support to the students. They also describe civil rights topics, such as Rosa Parks’ refusal to sit at the back of the bus and Martin Luther King’s message of civil disobedience. Every left-hand page has an historical photograph or illustration that graphically illustrates the time.

This is a remarkable book because it covers a pivotal moment in American history through the eyes of one of the nine students on the front lines. The drawbacks are that the narrative gives scant information about the other eight students, and that the authors force the story into long quatrains with often-awkward abab rhymes (a hateful look “beamed” in order to rhyme with “scream”); the rhyming element seems odd and unnecessary.

These problems deflect little, however, from the great teaching moments this book provides. While apparently aimed at “all ages,” it would be an excellent resource for any middle school classroom.