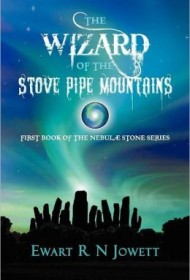 This shelf-bending novel brings together the very best and worst elements of epic fantasy.

Set in the realm of Mystralia in the kingdom of Orionada, the story begins simply enough as a young brother and sister set out on a quest to find their missing father, who left on a mysterious journey almost a year earlier. In a vast and wondrous world on the brink of all-out war, the children’s search is almost immediately fraught with peril, but thanks to more than a few benevolent people along the way, they make it to a strange place known as Weirdsdale, where they finally discover a possible insight into their father’s whereabouts.

The town is located in the foothills of the Stove Pipe Mountains, a range renowned for its cylindrical peaks, and the intrepid duo connect the disappearances of several townsfolk to the legend of the “Dweller of the Mountains,” a reclusive wizard who is rumored to live somewhere in the mountain range.

The story grows exponentially more complex as the children (and their allies) find out more about the wizard, his objectives, and the ongoing conflict between good and evil, not only in their realm but on the planet and throughout the universe as well.

The back cover notes that the author is a “storyteller extraordinaire,” and there is much truth to that statement. The main characters are beautifully portrayed, the world building is exceptional, and the narrative voice is fluid and confident.

But like many other epic fantasy sagas, this ambitious novel suffers terribly from a convoluted storyline (aliens, faeries, elves, etc.) and problematic pacing. A quest fantasy is serpentine by nature, but when readers commit themselves to a book of this bulk and find that the storyline has barely progressed after 700+ pages, the experience is rarely satisfying.

A healthy dose of editing (and proofreading: there were numerous grammatical errors) and a streamlined storyline would make this flawed release an extraordinary read.