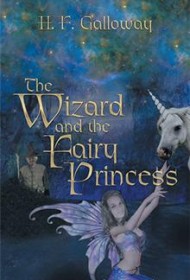 This fantasy novella describes the adventures of an American man who travels to England because of his fascination with myths and fairies. He is magically transported back in time and meets fairies, gnomes and other creatures, along with an evil witch queen.

While in England, the man conducts an ancient ritual/mythical experiment and, in the process, summons fairies. Soon, the fairies whisk him back in time to their home in Crystal Realm, where he meets the evil queen who rules the land. He also learns that having been improperly transported without a set of “restrictions,” (rules about what he is allowed to do in Crystal Realm) he must remain there forever. He accepts his fate without introspection or trepidation.

After escaping from a dungeon, the man receives aid from a beautiful fairy princess and the kind Lady of the Lake, an act that is followed by conflicts involving the creative use of mirrors and clever tricks on leprechauns. Convinced he is destined to be a wizard, the man uses his power to help ensure peace throughout Crystal Realm.

While a playful imagination is at work here, problems with writing detract from overall enjoyment. The story confusingly shifts perspectives, jumping from the man’s first-person perspective to second- and third-person narration, as the protagonist knows what is happening in scenes where he is absent or unconscious. Tenses also jump around unexpectedly, and typos are distracting. The story would benefit from editing to make the writing style more consistent. Additionally, it would be more emotionally engaging if the author shared the man’s thoughts and feelings, rather than merely his behavior.

Although the title, cover, subject matter, and length would indicate a children’s book, this novella seems better suited for young adults. The narrator talks about pubs, liquor stores, and alcohol, and uses higher-level words, including “entities,” “topography,” “luminescent,” and “incubation.”

Overall, the novella holds promise. But thoughtful revisions would make it a much stronger offering.