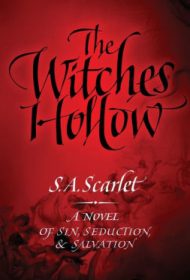 When destitute alcoholic Arthur Montesque receives a strange letter about a new job paying a life-changing sum, he’s so anxious to improve his life that he doesn’t research what this job actually entails. A bizarre limo ride and a dangerous two-day trek to his new place of employment end in the town of Lost Hollow, which appears untouched by time and hides endless secrets.

A meeting with attractive barmaid Vanessa and the delivery of yet another odd letter sheds further light on his purpose in town. However, the relatively simple request from his new employer does little to prepare Arthur for what’s coming. Danger and deceit await him on a truly life-changing path.

An unpredictable, complex plot—filled with unusual creatures and a battle between good and evil—is supported by Scarlet’s detailed descriptions of each scene, character, emotion, and interaction. In the initial chapters, these wordy depictions slow the story’s pace while very little consequential action seems to occur. However, as the plot progresses, the intricate narrative finds its flow and the pace quickens.

A completely unexpected plot unfolds to include danger at every turn and a fair amount of sex between multiple characters, primarily with Arthur and the village women. The sex is explicitly described, as in: “She was still toying with his cock…She lay on his left side and reached under his ass…found his anus, and pushed her finger in once more.”

Arthur is an anti-hero, a long-time alcoholic with no knowledge of his past or his powerful future. He transforms throughout the story, as do many of the primary characters, such as Vanessa and the mysterious Moppet. Nothing is ever quite as it seems, and as the threads unravel, the characters’ true natures are revealed.

Entirely original, The Witches Hollow is a compelling read for those that appreciate mystery-driven supernatural adventure and erotica.