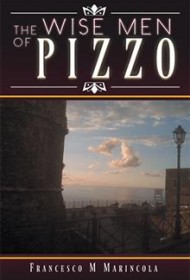 In this perceptive and uniquely structured tale set in the present day, a man now working successfully in America returns to his sleepy coastal birth town in southern Italy for a break from his troubled marriage. There, he learns through a town elder the dark undercurrent of his childhood friend’s life.

Guiseppe initially is dismayed about the overwhelming ennui he feels after his arrival in Pizzo. However, he eventually gains new perspectives about life while reuniting with longtime villagers, including a dignified gent called “il Marchese”; a doctor; a lawyer; and a retired school principal Don Ciccio, called “il Professore.” (The occasional chats in Italian are translated in footnotes.)

Ciccio surprises Guiseppe with news about the death of Alessandro, once the younger man’s good friend, and shares an incomplete autobiography Alessandro had penned. As the story unfolds, flashbacks illuminate how life choices made by Alessandro, including his apathetic approach to bedding multiple women, had a disturbing impact on himself and others.

Apt and amusing character descriptions ring true, adding punch to the story. The doctor, for example, who smokes and drinks heavily, has “a consumptive belly, a notable tremor” and a “propensity to snort, grunt, and cough in creative cadence.” The subtle, yet layered plot reads more like a memoir than typically structured literature, its storyline gaining strength and then dissipating like ocean waves.

Although readers who stick with the story are rewarded with answers to the mystery of Alessandro’s puzzling demeanor and questionable lifestyle, some may be ultimately let down by the colorful characters, who, while drawn in interesting and amusing ways, lack the staying power to touch readers emotionally.

Nevertheless, this is an entertaining book that compels readers forward toward a wise message: No matter where life takes us, ultimately, it all fades to black.