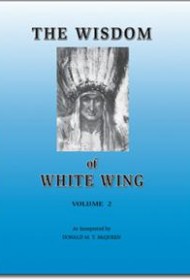 In 1927, a group of seekers belonging to a spiritual sect, the Circle of Light, met in London and again periodically on Vancouver Island until the ’50s. One of its members, Harry Drake, acted as a channeler, receiving the words of a spirit known as White Wing. (For the uninitiated, a channeler communicates between humans and any non-physical entity.) Drake passed along White Wing’s teachings to Donald McQueen, another participant of the sect and former member of the Royal Canadian Air Force, who 50 years later, published three volumes of White Wing’s sacred messages. This is the second, and it’s a majestic work of frequent insight, even for a skeptic like this reviewer.

McQueen offers White Wing’s answers to 254 queries posed during the London gatherings, and the entity’s scope of knowledge is impressive. White Wing explains the deeper meaning behind everything from love at first sight to alcoholic treatment, birth, dogs, dreams, diseases, astrology, and much more.

Despite its multifariousness, the tome is cohesive thanks to a consistent voice. However, White Wing’s answers are often so esoteric, it’s tough for mere mortals to grasp his wisdom. When asked “Why are some dreams so confused and others so clear?” White Wing’s response exemplifies that difficulty: ”…dreams really do not belong to the brain and maggots in the blood that stir it the wrong way — they are not dreams.”

In fairness, McQueen suggests Volume 1 should be read first before diving into this edition. Perhaps it offers much needed illumination. But even without it, there are copious pearls to be found here. Ultimately, despite the deeply esoteric nature of the work, White Wing offers a chance for the reader’s imagination to take flight, even soar -– and that may be a trip worth taking, if just for a different perspective of life on earth.