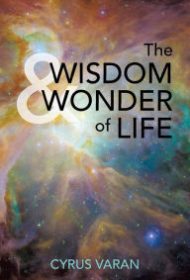 Darwin’s theory of evolution was controversial in its day and remains so. For some, Darwin’s is the only rational view on the origins of life. Others, based on religious faith, maintain that a divinity must have played a role. In this book, Cyrus Varan proposes a rational argument in favor of the viewpoint that, “No simple, casual and singular causation, such as natural selection, can address the cause for the existence of life.”

The author argues, using the mathematics of probability, that the profusion of life on Earth could not have been produced by chance. For example, he concludes that, contrary to a well-known thought experiment, monkeys with typewriters could never produce Shakespeare’s works because it would take longer than the age of the universe for them to produce a single line of a book.

The author ruminates upon the complexity of biological life, including the topics of DNA, human reproduction, the human brain, the sense organs and the endocrine system. He challenges the Darwinian notion that random mutation could have produced the variety of species we observe. Varan then posits that such a complex universe must be the work of some cause beyond our ken.

Varan holds a doctorate in applied sciences and uses the intellectual firepower of modern mathematics to sustain his viewpoint. Because he writes in short sentences, free of science jargon, lay readers will find his work readable and accessible. His style is technically sound, clear and measured, though not usually elegant, but his prose becomes increasingly lyrical as he introduces his conclusion of a mysterious force behind all we see. It’s as much a meditation on the beauty of the cosmos as a scientific argument.

With the continuing heat around the debate between evolution and “intelligent design,” it is refreshing to read rational arguments that rely neither on faith nor anti-religious polemics. Any reader interested in the fundamental question of human origins will benefit from reading this brief treatise.