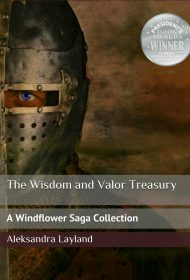 Set in the sprawling fantasy realm of Kimbria, this omnibus edition contains the second novel from Aleksandra Layland’s Windflower Saga trilogy (Of Wisdom and Valor: The Art of War. The Path of Peace) as well as three related novellas (Bind Not the Heart, Leofric of Longridge, and Swords of Ansgar).

A palatable blend of fantasy and romance, the stories–particularly the novel—have a decidedly historical fiction feel to them à la Guy Gavriel Kay and Ken Follett, although the various narratives are set in a secondary world realm. The seed for the tales, which the novel explores, is the initially tumultuous relationship between a mercenary named Leofric and Keridwen, Duchess of Ansgar—who together eventually go on to become King and Queen of Kimbria. The politically nefarious circumstances of how Leofric and Keridwen meet (he was essentially a pawn for the Royal Council and was supposed to be her “warden” after she is elected queen), and the organic way in which their relationship evolves, is insightfully and intimately explored.

The novellas chronicle the lives of a diversity of characters of different generations in the same family tree. Make no doubt about it: these are character-driven stories. Even secondary figures, such as Leofric’s lieutenant Wulfgar, are brilliantly portrayed as three-dimensional, identifiable characters that come alive on the page.

The novella Bind Not the Heart tells the poignant story of Sister Ermentrude and Brother Ermen, the courageous nun and monk who helped raise Keridwen and Leofric, respectively. While it beautifully complements the preceding novel with another powerful narrative layer, the other two stories offer little in way of revelation or thematic depth. But that said: This is an utterly readable and deeply moving collection of Kimbria stories. Additionally, subtly utilized themes of honor and faith give the stories an enlightening tone.