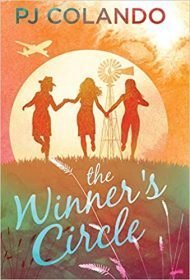 This light-hearted tale follows the lives of three couples impacted by a windfall that changes their lives.

As the story begins, “late-in-life newlywed” Fran, a retired school principal, is awakened by the Amazing Grace ringtone that signals it’s her friend Bonnie. Bonnie, formerly secretary of the church where Fran’s new husband is pastor, is headed to Las Vegas to marry her boyfriend, Carl. She asks Fran to check her numbers during the lottery drawing that night.  Fran does as asked and discovers Bonnie has the winning numbers worth $536 million.

She calls Bonnie to share the news, prompting the pair to return to Michigan to pick up Carl’s brother Steve and his wife Jackie to accompany them on their wedding trip. After the wedding, the foursome take an extended honeymoon to California, Hawaii and Australia. Meanwhile, Fran is tasked with keeping an eye on Brandon, Steve and Jackie’s unreliable adult son, who is overseeing their dairy operation.

As is often said, money changes everything. Bonnie becomes bossy and rude; the husbands misbehave in ways unlikely before the win, spawning criminal charges and lawsuits, and Carl’s ex-wife decides she deserves a cut of the cash—all of which raises the question of just how much money Bonnie will have left when the dust settles.

This is a humorous tale, featuring at its heart three lively women who are colorful and fun, Christian but not saintly, and with their own cannabis connection. The descriptive writing is original and even laugh-out-loud funny, such as: “She wore so much perfume, she almost didn’t require clothes.” Or, in describing Brandon’s impulsive visit to see his girlfriend: “A five-hour trip — four hours if he was in heat …”

Occasional grammatical problems arise (“Since meeting Steve at seventeen, whenever he smiled, his eyes crinkled …”), as do an overabundance of “hell’s bells” and “crapola.” Those small matters aside, this an enjoyable read likely to particularly resonate with women of a certain age.