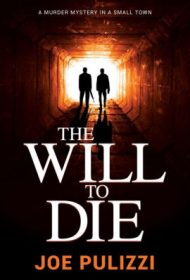 The Will to Die, author Joe Pulizzi’s first novel, is a mystery revolving around a small Midwestern city’s ugly secret.

The story opens with the death of funeral home owner Abe Pollitt. It then switches to Cleveland, Ohio, and the marketing company run by Abe’s son, Will Pollitt, and his partner Robby Thompson. When Will learns via text during a business meeting that his father has died of a heart attack, he heads to his hometown of Sandusky, a small city on Lake Erie, close to Cleveland.

The book’s first third is a scene-setting survey of Sandusky, whose waterfront district has been redeveloped in recent years by a business group originally founded by Abe and other town leaders. Will meets members of the Sandusky Alliance, or SA, who offer to buy the family business at above-market prices.

Soon, though, Will begins to wonder about his father’s death, which his sister regards as suspicious. He also ponders unsettling questions about Sandusky, such as: How do SA members know about Will’s messy finances? And why does he see so few minorities in the city? Meanwhile, he uncovers information on a growing mystery about the SA, thanks in part to clues left by his father.

The narrative races along from there, driven by snappy dialogue and engaging backstories that help readers invest in the characters.

Pulizzi is a breezy, easy-to-read writer with a penchant for bringing pop culture references into the prose. Describing the colorful reception area of a marketing company, he writes: “The whole experience was Willy Wonka meets Elon Musk.” When Robby notes that the secrets they’re uncovering are like something from John Wick, Will counters, “Like in Indiana Jones …. The one with Sean Connery. Where the Jewish guys set fire to the sewer and all the rats go running.”

All told, The Will to Die presents fresh and surprising plot twists that are sure to keep readers riveted until the shocking conclusion.