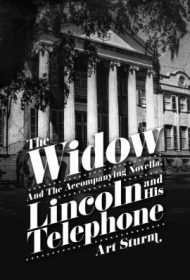 In this volume by author Art Sturm, two pieces of fiction, one contemporary and one of speculative historical fiction, share a glimpse into America’s long struggle with violence and racism.

In “The Widow,” Sturm paints a dark picture of modern-day Baltimore in which two families, one white and one black, struggle with gun violence and dangerous racial bias. When black high school graduate Jamal Lewis asks white graduate student Jake Krueger for advice on getting a college scholarship, Krueger’s racial bias exacerbates Jamal’s problems. Even though there is a reconciliation between the two men and two happy marriages are made among the characters, the book’s finale is a devastating act of revenge for all the pain of the past.

“Lincoln and His Telephone” imagines how the Civil War might have played out if a communications device called Talk-to-Talk, invented with help from 14-year-old Alexander Graham Bell, had been in use from the first Confederate assault on Fort Sumter.

While an interesting conceit, “The Widow” is problematic on three levels. Jake Krueger and a fellow graduate student get married after a rushed courtship that seems implausible and is portrayed in stilted dialogue. The conclusion is inconsistent from the characters’ earlier thoughts and behavior. And, finally, the text requires a more thorough copyedit; for example, the characters Rizzo Cortez and P.J. Livener go by different names within three pages, and there are glaring typos (“Had you mentioned the noise, I could have stopped at a pharmacy and gotten air [sic] plugs.”)

“Lincoln and His Telephone” is a cleaner read, with much more believable dialogue, more plausible character motivations, and a compelling premise.

While the first story requires some revision, the second is largely enjoyable. Unfortunately, readers frustrated by the problems with the first may not persevere to appreciate the “what-if” Sturm has explored and expressed more skillfully in the second.