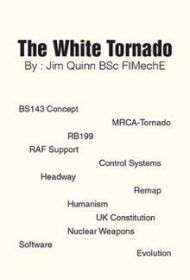 British author Jim Quinn spent more than two decades in the development of highly complex aircraft engines. In his memoir, The White Tornado, he tries to convey what those early days were like.

Unfortunately, his writing reads like a highly technical report. Without a grounding in engineering and/or a familiarity with aircraft engines, readers will be lost. A typical passage: “I worked with SNECMA (Melun, Paris) in 1966 on the M45G engine for the AFVG (Angelo French Variable Geometry) aircraft, then I created the Bristol Engines 1967 performance software simulation in Scheme P for the two shaft BS143 and the same in 1968 for the three shaft RB199, the MRCA engine.”

Quinn is also prone to using abbreviations and acronyms to excess. The name of one wing commander, for example, is followed by “CBE, DSO, DFC, DL, FRAeS.” Additionally, he uses mathematical formulas and complex diagrams that are likely beyond the average reader.

Even amid the jargon and alphabet soup, there are interesting tidbits. For example, Quinn developed a piano note frequency test, striking a combination of keys to produce a note that approximated the buzz of an engine encountering a certain problem, helping pilots recognize the danger. Although most of the book covers his work on advanced engines, Quinn also writes about his hobbies and interests (hang gliding, Gilbert and Sullivan, motorsports, church clock restoration and his designing of more than 80 items to assist the elderly and physically disabled). This is fascinating material, but it’s unfortunate there isn’t more of it.

The last few chapters are devoted to his ideas on a variety of topics: rail safety, air traffic control, a new constitution for the UK, evolution, extraterrestrials, better planning of pedestrian traffic signals, the need for the prime minister to answer every letter he or she receives, and so on.

The book would be much improved with greater focus and accessibility. As is, only a narrow audience will likely appreciate its contents.