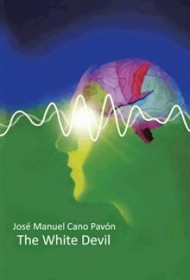 José Manuel Cano Pavón’s The White Devil begins with the doctor-hero of the book, Leopold Trillo, attempting to treat two depressed young men, Michael and Borja. Both Information Technology students at a local college, they were admitted on the same day, after suddenly refusing to eat or dress or use the bathroom. As it turns out, they had been together the night before, surfing the Internet, when they looked at a strange email attachment. Afterwards, they became sick.

Neither boy responds to antidepressants, so after several weeks Trillo uses shock therapy on them after DTI, or “Depression Transmitted by Internet” becomes a widespread, worldwide phenomenon. Though somewhat effective, shock therapy is not a viable option for many people, so the Internet disappears almost overnight.

From that point on, The White Devil consists mostly of describing what would happen if mankind were suddenly robbed of email, message boards, YouTube, electronic banking, etc. The short version is that society would change radically, and it’s extremely obvious that Pavón thinks this would be a good thing. The idea of a return to a pre-1970 society, where humans, rather than machines, do the work of the world, clearly appeals to him.

His perspective is never more obvious when television starts causing Television Depression (TD), which is pretty much the same as DTI. Trillo and his family are unaffected by TD because instead of watching TV, every night he makes his kids do homework and read books “suitable for their age for half an hour.”

While some readers may be comforted by the idea of an Internet-free near-future, many others will be annoyed by the author’s dismissing the destruction of positive efforts such as Project Gutenberg in the service of getting back to a nebulous “simpler time.” In addition, the writing style is simplistic, and the pacing is slow. More speculative invective than novel, this slim book will likely appeal only to those who already hold the author’s views.