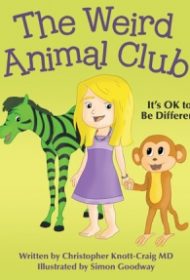 The Weird Animal Club by Christopher Knott-Craig introduces young readers to a group of animal friends who each have unique characteristics.

Zoey the Zebra is sad. Everyone knows zebras have black and white stripes, but Zoey’s stripes are black and green. She feels weird and lonely–until she meets Alex, a monkey with only one arm. The two become friends, and soon meet other animals who feel isolated because of their differences, including Hannah, a hedgehog with only one quill, and Tina, a turtle with no shell.  Before long, the Weird Animal Club has many members, and nobody feels lonely anymore.

The Weird Animal Club is a sweet, if simplistic, story that offers young readers examples of self-acceptance, while also providing a few giggles. The illustrations are large and sharply reproduced, and the language is perfect for a young target audience.

Although the prose is not particularly notable, the author uses repetition that’s likely to charm youngsters.  As each new Weird Animal Club member is introduced, the author lists the others who have come before. For example, before introducing the fourth animal, Rebecca the Rabbit, the author writes: “Zoey, the zebra who had green and black stripes, Alex, the monkey with only one arm, and Hannah, the hedgehog with only one quill, were playing in the forest when they saw a rabbit hiding in the bushes.” Each new animal and its unusual feature are added to the list as the story progresses.

The message would have been stronger had the animals found acceptance outside of their circle, showing that those who are different have a place in the wider world. Still, children who feel different will appreciate the idea of a welcoming group that is tolerant of all.

In the introduction, Knott-Craig explains that he wrote the story for his six-year-old daughter, who felt lonely because of her own differences. The heart behind his motivation is evident, making The Weird Animal Club an endearing read.