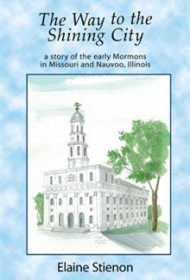 This absorbing, well-researched book tells a fictionalized account of early Mormons struggling to live in peace with their newfound religion despite surrounding turmoil.

Gabriel, the book’s main character, is a blacksmith and physician who joins other Mormons to build a new life in Missouri and even rescues a man from slavery along the way. However, continuing violence against the Mormon families forces them to flee the state. Gabriel is shocked at what he hears about the attacks: “The murder of children. The supreme event in a series of outrages. Grief and anger rushed over him. All he had seen and experienced, all he had heard, seemed to culminate in one great surge of rage. Rage not so much at the soldiers, but at God for allowing such evil to be played out to its bitter end.”

The Mormons escape to a small town on the Illinois side of the Mississippi called Commerce, which is renamed Nauvoo and directed by Brigham Young. But the families become unsettled when the Invincible Dragoons militia is formed and shocked when they hear rumors that new leaders Joseph Smith and Dr. John Cook Bennett are taking celestial (or multiple) wives. The turmoil destroys the city and disrupts the dreams of the Mormon families, who are uprooted once again.

Author Elaine Stienon has done a masterful job creating likable and genuine characters. A self-described buff on the history of the early Mormons, she has skillfully woven the lives of her imagined families among the factual people and details surrounding the persecution of this religious group during the time period of 1839-1846. The book’s dialogue rings true and the backlight of history is vividly presented without weighing down the fictitious elements of the story.

Stienon’s empathy for her characters is well placed in her compelling work regarding a little-known time in Mormon history. It is bound to please and educate a wide audience of fiction readers.