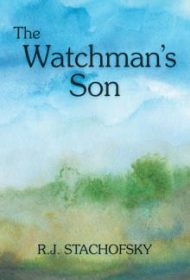 After wandering the back roads of the West, a young man returns to his hometown after more than a decade away in R.J. Stachofsky’s novel, The Watchman’s Son.

When 30-something Jacob Sparks arrives in Fletcher’s Crossing—which he recalls as “just a rickety, old ferry and a small cabin”—he’s been on the road so long he doesn’t know what year it is. Judith, a woman who shares the cabin with her husband Sam, the “watchman” who co-owns and maintains the ferry, and Nate, his adolescent son, tells him it’s May 7, 1897. Jacob sticks around, earning room and board by working around the property.

During his travels, Jacob has experienced great sorrow and befriended a Native American who taught him life skills. He’s also haunted by his past in nearby Ash Fork, and as he travels there with Nate for supplies, he increasingly feels the need to confront these ghosts. Meanwhile, there’s a cantankerous bull to avoid and a violent run-in with some men disgruntled at having to wait for the ferry.

Stachofsky depicts life in a simpler era, sometimes seemingly idyllic, but also difficult and challenging. The characters are likeable and complex. And while the plot relies on life’s day-to-day mundanities, it’s engaging and unpredictable as the compelling mystery of Jacob’s past propels readers forward.

Stachofsky’s prose is straightforward with an occasional touch of lyricism, such as his description of Jacob’s love of trees: “The mightiness of them … the music they make as the wind passes through their branches and the motion of their dance as they sway back and forth in a stronger wind.”

The story is somewhat undermined early on by confusion about the relationship of Nate to Judith and Sam. Likewise, it seems implausible that Jacob doesn’t remember significant people or places from his past. There are also some editing issues, such as “starring” for “staring.”

Such problems aside, this is an enjoyable read that should appeal to a wide audience.