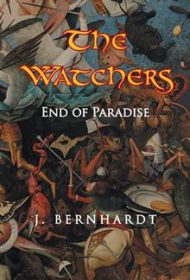 Inspired by the Old Testament—particularly the reference in the Book of Genesis to Nephilim—J.Bernhardt’s debut novel is a religious fantasy that chronicles a group of beings blessed by God. Their mission is to rid the planet of the Nephilim, who are described as the descendants of the “fallen angels” who took human women as their wives and produced “abominations” from their coupling.

Set in antediluvian times, the narrative chronicles the Watchers, gifted by God to be “semi-immortal” giants with superhuman strength and speed and the ability to fly and breathe underwater. It details them as they migrate to an Atlantic island to prepare for the looming battle with the Nephilim. But when the war never comes, the group and their descendants slack off, losing their focus on what’s important. Over time, they forget their knowledge of the old ways and how to use their abilities.

But then a young boy named Sagiv becomes the first Watcher in generations to answer the call of his Watcher guardian angel, Faax, who teaches him the sacred, life-changing, lost knowledge of his people. But is it too late to bring an entire nation back to God? Has Lucifer, left unfettered for all these millennia, already won?

Although the novel explores some powerful themes, a multitude of craft issues make for a less-than-satisfying read. Grammatical errors abound, mainly dealing with punctuation, but the biggest problems regard description and structure. There is little-to-no description, resulting in cardboard characters and two-dimensional backdrops. The storyline is equally flawed; the first 60-plus pages are essentially backstory, and it’s not until page 66 that readers are introduced to a character integral to the storyline.