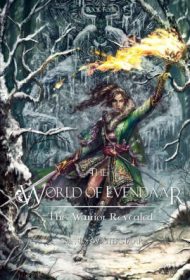 In the fourth installment of A.R. Winterstaar’s World of Evendaar fantasy series, a divorced mother of three is transported from Earth to a magical realm, where she discovers she is a queen whose life is entangled in a potentially apocalyptic prophecy.

As the novel begins, Queen Adelena is about to embark on a perilous journey to try to save her gravely ill infant daughter Stella, who will most likely die if she doesn’t receive the only thing that can cure her: a Dragon Tear. With her two other children in jeopardy in a castle full of enemies who are plotting her downfall, the queen has charged Prince Rainere with keeping the children safe until she can return to the Golden Palace.

The novel essentially consists of two intertwining plotlines: One follows Adelena and her crew as their quest leads them into a largely unexplored mountain region filled with mythical creatures and races; the second chronicles Rainere’s struggles against political enemies who want Adelena’s children dead and the queen imprisoned.

One of the story’s strength’s is the depth of secondary characters, such as the over-sexed and morally bankrupt servant Lady Olivia. The extroverted giant that Adelena meets up in the mountains, Jordan Jordansson, unarguably steals the show. The other various narrative elements—world-building, pacing, readability, etc.—are solidly delivered.

The narrative’s main problem is that it doesn’t stand alone. New readers will be utterly lost without reading the first three volumes, and longtime fans will be left less than satisfied with a conclusion that is more a respite than anything else.

That said, this is a fun read, one that brings to mind a melding of Laurell K. Hamilton’s Anita Blake with Lev Grossman’s Magicians trilogy. Blending adventure fantasy with a bit of romance, Winterstaar creates an effortlessly readable story.