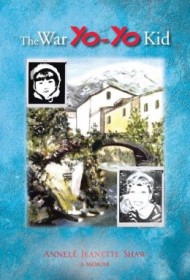 Children are resilient and adaptable, but war makes nearly impossible demands on them. Annelé Shaw’s first displacement came when she was just over one year old; the little-known Russian-Finnish War sent her from home and family in Helsinki to a new family in Denmark. By the time she was allowed to return, her birth family members were basically strangers. Thus, she returned to her more familiar hosts and was inspired to name her book, The War Yo-Yo Kid.

The War Yo-Yo Kid contains some painful stories. (When a previously friendly neighbor makes an aggressive sexual advance on her as a teenager, she writes: “…I managed to kick myself free of him and got out of there.”) And Shaw bounced between Finland and Denmark more than once, each time feeling like a stranger among her birth and adopted families.

A memoir packed with photos, Yo-Yo seems designed for the enjoyment of family and friends, as it suffers from several drawbacks likely to deter general readers. Bland observations, such as, “It [the trip] was very impressive and one of those things you will always remember,” don’t offer the reader much to visualize. And Shaw also spells numerous words incorrectly, from payment of a “war death” (debt) to doing handstands and “Sawmosaltes” (somersaults). There are also abundant and unnecessary “quotation marks.” The writing’s chatty tone makes these errors generally easy to digest but suggest a conversation with intimates rather than a wider readership.

Still, Shaw moves the action along, from her years working as an “au’pare” [sic] in London and Paris to finally settling in the US. And the photo album approach and surplus of anecdotes about friends make this a likely hit with anyone who knows the author.

Overall, this book is a testament to Shaw’s spirit and adaptability. While the author’s inner circle is her most likely audience, any reader meeting her here will be won over by her likeability and strength.